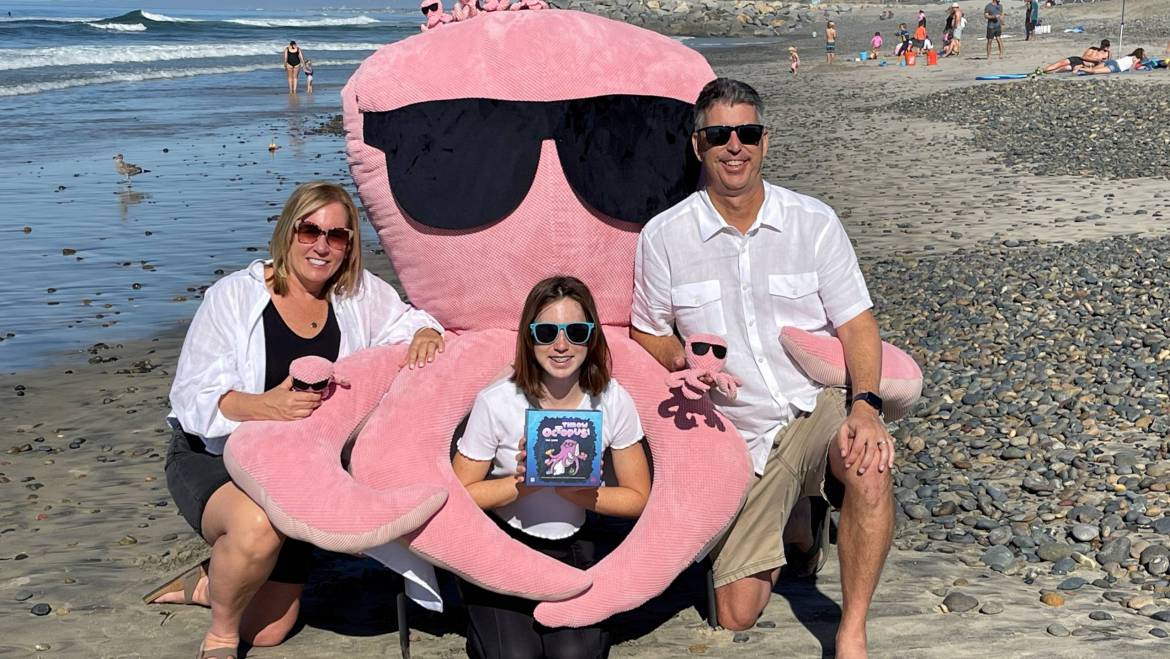 It’s simply enormous! It stands over 5 ft (1.52 meters) on its tentacles. Its circumference stretches 18 ft (5.49 meters) and it weighs 40 pounds (18.14 Kilograms). It’s Google search verified as the world’s largest stuffed plushie octopus and even comes with its signature 3 1/2 ft large sunglasses.  Inspired by a scene from the Tom Hank’s movie Joe Versus The Volcano, this adorable, pink eight-limbed plushie was recently created by the Rauch family of Carlsbad, CA to help promote their upcoming new game called, Throw Octopus!

The creator, Brian Rauch, explained the inspiration, “There’s a scene where Tom Hanks goes through the Waponi Cleansing ritual which includes an octopus being wrapped around Tom Hanks’ face as he prepares to jump into the volcano. It was that moment that inspired the theme for this game.”

It was special ordered from China to be an exact 10 times larger replica of a smaller version (6 inches versus 60 inches high) of their octopus plushie toy. During the transit from China, it got delayed in customs several times. It even had to be x-rayed.  It’s big enough to certainly stuff 2 to 3 small people inside it so why would any custom agent think there was a need to check out this monster sized stuffed octopus a little closer?

The Rauch family – Brian, Jennifer, McKenna, and their dog Monkey, lives in Carlsbad, CA, and share a passion for uncomplicated mind games. And they take their games seriously. In fact, they’ve gone so far as to throw out any game that’s deemed “too complicated” – we’re looking at you, Scythe. Basically, any game that takes more than 15 minutes to understand the basic rules, they scrap it.

What’s even better is that they take the same principle to heart when it comes to producing their games. If it’s not fun, easy to understand, and challenging, then off to the bin it goes.

In the case of this new Throw Octopus! game, players use their wits to place all their tiles first as they race to create a seascape of colorful sea creatures including the Yellow Submarine Slug, the Orange Peel and the Pink Jellyfish.  Place a tile with an Octopus Icon, and there’s a good chance you’ll get to throw an octopus at one of your opponents.  It’s a painful attack as they not only have to endure the Tom Hank’s Waponi Cleansing ritual but they also have to draw 2 more tiles, and lose their next turn.

Luckily you don’t have to receive the giant octopus to your head. The one included in the game is only a baby at 3″ long and weighs about 1 once. Mom will feel at ease!

The family launched their first game Shady Pets In 2020 and has already sold over 35,000 units on Amazon. This very popular game is a unique combination of Clue and Uno and is themed around the four popular pets (dogs, cats, hamsters, and reptiles) all wearing shades!

The game totally sold out during the holiday shopping spree of 2021 but more are coming soon!

More About the Rauch’s

In addition to their love for board and card games, the Rauch family also enjoys camping and trips to the beach. Brian enjoys volleyball, screenplay writing and coaching soccer. His wife – Jennifer, on the other hand, regularly volunteers at McKenna’s school as well as the National Charity League. McKenna dreams of becoming an aerospace engineer or professional soccer player. And their Shih Tzu/poodle Monkey does take her role as protector very seriously. When she’s not enjoying his mandatory belly rubs, she’s busy protecting the family from a rat who’s trying to mark its territory on their backyard fence.

Get Set to Throw Octopuses

Itching to get entangled in some tentacles with the new Throw Octopus! Tile Game? It’s going to be released in March 2022 on Kickstarter. But you don’t have to wait till then.  Reserve yours at 40% OFF (Early Bird Reservation) on their official website www.throwoctopus.com

As for the giant Octopus being available. Well, not yet. But if you’re Tom Hanks, they’ll make one for you special order!

View the trailer below …

The attack of the giant octopus …

Manage Cookie Consent
To provide the best experiences, we use technologies like cookies to store and/or access device information. Consenting to these technologies will allow us to process data such as browsing behavior or unique IDs on this site. Not consenting or withdrawing consent, may adversely affect certain features and functions.
Manage options Manage services Manage vendors Read more about these purposes
View preferences
{title} {title} {title}